I attended NSTA 2016 in Nashville with one goal in mind: Find NGSS experts from around the country and learn from them.  I left Nashville feeling satisfied that my goal had been accomplished.  I met science teachers that were as passionate about implementing NGSS as myself.  In addition, I found masters in their NGSS trade, most notably Mark Windschitl and Philip Bell, both professors out of the University of Washington in Seattle.

If you aren’t familiar with Mark Windschitl’s work on Modeling (Science and Engineering Practice #2), get to know his work and listen to him speak.  I walked out of his NSTA presentation feeling like the rug had been pulled out from beneath me.  For over a year I had been under the false impression that I knew what modeling was and, in fact, thought I was implementing it pretty well.  But the process of modeling does not equate to molecular modeling.  My chemistry students were quite studly at drawing diagrams of molecules and showing interactions between them.  Heck, my students could draw hundreds of molecules in seconds using their 1:1 iPad devices.  So I was in for a rude awakening when Windschitl explained that the practice of modeling relates to what scientists and engineers do in the real world.

When we witness something baffling or complex in nature, our minds naturally try to make sense of what happened and how it worked.  When scientists try to explain a complex process, they develop explanations that involve representations and a variety of scientific ideas.  These explanations are tentative, in other words, there is uncertainty about the solution and the “model” must be adjusted or revised as new scientific information is presented.  Chemists can understand modeling best by considering the historic models of the atom.  As new scientific data presented itself, our model of the atom changed from a small marble-like ball with uniform density to a positively charged nucleus surrounded by clouds of electrons with wave-like behavior.  The model (both visual representation and description) changed as scientists uncovered new evidence from scientific experiments.  A model is flexible and must adapt over time. 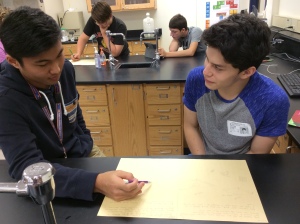 The NGSS encourage science teachers to train students in a way that will help them develop the skills that scientists and engineers need to advance scientific knowledge.  Windschitl explained that students can practice modeling by observing a puzzling event and use a wide range of scientific knowledge to explain it.  An anchoring phenomenon is one that cannot be explained by one teaching lesson or by Googling it online.  Students witness an anchoring phenomenon at the beginning of a unit and develop an explanation of what happened through the use of both text and visual representations.  Units can be scaffolded such that students gain scientific knowledge based on evidence from experiments which adjusts their understanding of  how the event unfolded.  As new information is gained, the student’s model changes.  Windschitl suggests a preliminary model at the start of a unit, a revision midway through the unit after new ideas are presented, and a final model at the completion of the unit.  Windschitl’s presentation left me stunned, humbled, and wanting for more information.  I started implementing modeling in my curriculum at the start of the 2016-2017 school year.  The greatest challenge has been finding anchoring phenomena.  The purpose of this blog post is to share what I’ve tried and hopefully get feedback from other chemistry teachers on what’s worked for them.

Matter Unit:  My first attempt at student modeling took place in my Matter Unit.  Based on 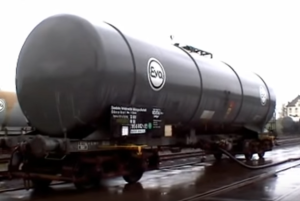 Windschitl’s advice and examples, I used the video of a Collapsing Train Car to anchor the unit.  I explained the background of the video before watching it.

Then I went through a list of “gotta have it” essentials written on the board that their models had to include: 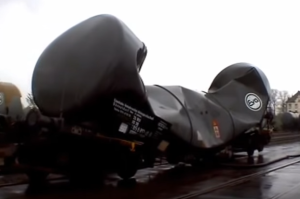 After the instructions, we watched the video one more time and my students grabbed drawing paper and dispersed into groups at the lab tables. 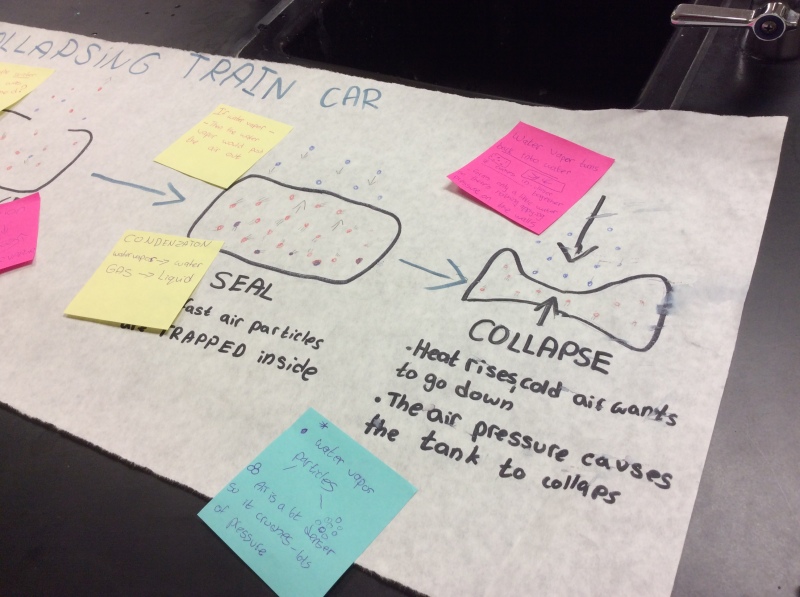 Thermochemistry Unit:  Admittedly, I was completely at a loss for what to use as an anchoring phenomenon for my Thermochemistry Unit.  I remembered an interesting demonstration from Educational Innovations that I’d done several times.  It’s called the “Amazing Ice Melting Blocks” and I chose to use it as a start to this unit.  Two black plates, identical in color and size, were placed under the overhead.  A rubber ring was placed on each plate.  Ice cubes of identical size were placed on each plate.  The ice cubes melted at dramatically different rates.  One quickly turned into a puddle, whereas the other looked essentially frozen after several minutes had passed. 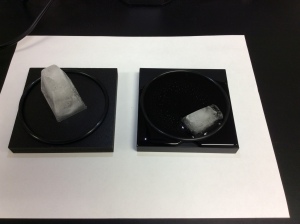 Using pictures and words, students were asked to explain why the one ice cube melted so much faster than the other ice cube.

As with all NGSS implementation, I find that there’s no textbook that teaches you best practices.  My philosophy has been “Just try it.  If it fails, the kids have observed something cool and we’ll try something different next year.”  My thoughts on this one- My students loved the demonstration.  They had interesting ideas about why the ice melted or didn’t melt.  Every class asked me if they could touch the black plates (one was cold and one was lukewarm.)  In reality, the concepts behind this demonstration were more complex than they actually appeared.  Several people, teachers and researchers, chimed in on Twitter when I posted this activity.  The plates, one made of wood and the other aluminum, most definitely have different specific heat capacities.  But the transfer of heat between the cube and the ice related more to the ability of the particles in contact  (or lack of ability) to transfer motion.  My students did an awesome job trying to explain why the particles in the wood plate struggled to transfer the heat.  Would I use this anchoring activity again?  Probably not.  I’d love to hear some new thermochemistry ideas. 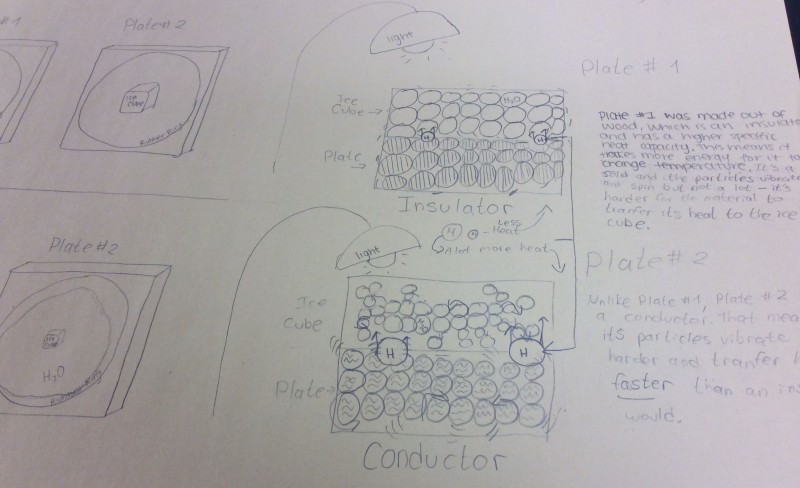 Periodic Table Unit:  I’ve always shown my students the alkali metal demonstrations during my Periodic Table Unit.  Typically I place lithium, sodium, and potassium in different beakers of water to show how the chemical reactions tend to get more violent as we move down the first column of the table.  In the past this demo helped my students understand the word “trend.”  That is, as we move in a certain direction on the periodic table, properties tend to increase or decrease.  This year I performed the same demonstrations but at the start of the unit.  My students had no awareness of the families of the table, classification of elements, or periodic trends.  As the anchoring phenomenon, the demonstrations were shown and students were asked to compare two of the chemical reactions, specifically lithium versus sodium in water.  During the modeling activity students were asked to use words and pictures to explain the following: 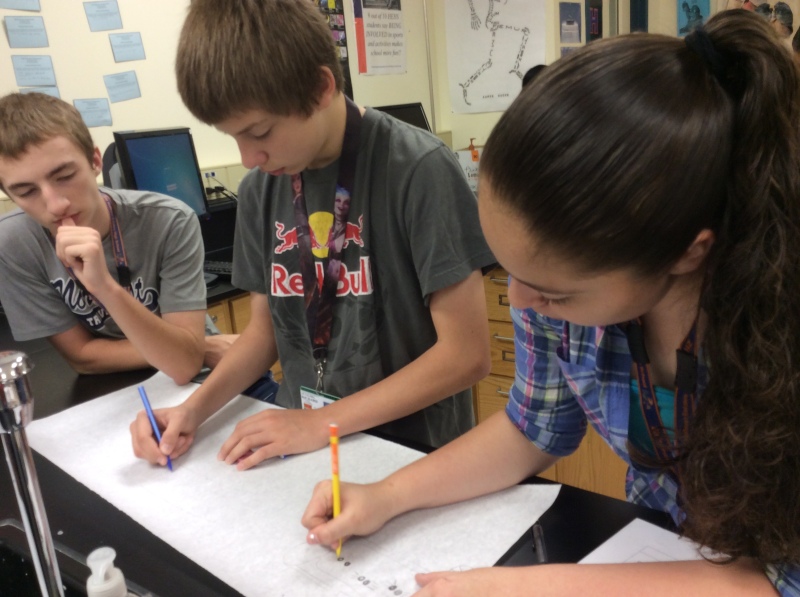 On a final note, the biggest struggle thus far has been brainstorming ways to assess these models.  By the end of the unit these models should provide good explanations of why/how the phenomenon occurs.  My colleague, Kristy Levanti, and I have been reflecting on multiple questions.  One, should the same model be shown on the summative assessment and each student develop the model on their own for a grade?  Two, what types of things should we award points for since there’s often more than one way to explain a complex phenomenon?  Three, should student participation in developing the models be graded?  Our last summative assessment for the Periodic Table Unit included a question similar to the Li/Na question mentioned above.  Although the prompt was not identical, students that put forth determined effort on the Li/Na model certainly performed better on the summative assessment modeling question.  I look forward to hearing your thoughts on these modeling activities.  Please share anchoring phenomena that you’ve tried  whether they’ve been successes or failures.  I’d also love to see examples of rubrics that you’ve used to grade these models.

3 thoughts on “Modeling an Anchoring Phenomenon”

I am a proud mother to three beautiful girls and two dogs (one naughty, one nice). Currently serving as Vice-President on the NISE Board of Directors. Incredibly proud of winning the CICI Davidson Award in 2015. I love presenting, whether it's at NSTA conferences, workshops for teachers, ChemEd, or private consulting. I am National Board Certified in HS Chemistry,